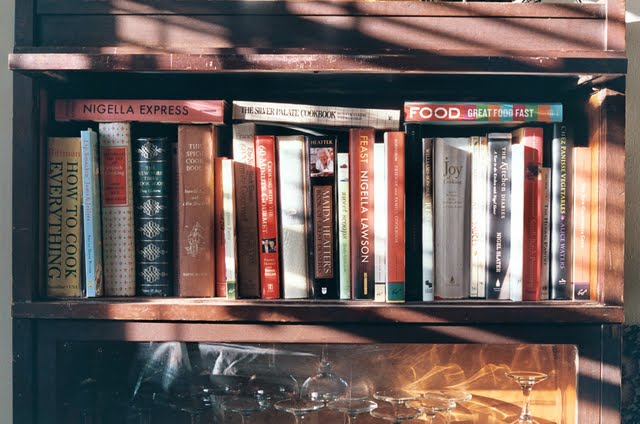 For 2014 I am, for the first time in my adult life, writing down every book I've read. I don't know why I've never done this, but, suddenly, it seemed like a good idea. There's no real direction here, though, as always, I am yielding to my desire for mysteries and mid-century British novels and novellas. So far:

A Lost Lady, by Willa Cather
An Episode of Sparrows, by Rumer Godden
Love Lies Bleeding, by Edmund Crispin
Helena, by Evelyn Waugh (twice!)
A Back Room in Somers Town, by John Malcolm
The Innocence of Fr. Brown, by G. K. Chesterton
The Gate of Angels, by Penelope Fitzgerald
The 27th Kingdom by Alice Thomas Ellis
The Inn at the Edge of the World, by Alice Thomas Ellis
The Beckoning Lady, by Margery Allingham
Needle in the Right Hand of God, by R. Howard Bloch
And Then There Were None, by Agatha Christie
The Sword and Honour Trilogy, by Evelyn Waugh
The Death of Ilan Illych, by Leo Tolstoy

Reading in 2013: Mostly mysteries. And cookbooks.

In 2012, I'll be reading through the works of C. S. Lewis. Not exclusively, mind, but his works will be a theme, and consistent thread through all my reading.

I plan to read the following titles:

And, daily I will read a few of his letters.
I plan to re-read the following titles:

The Four Loves
Perelandra
Till We Have Faces
The Chronicles of Narnia: Caspian through Silver Chair
God in the Dock
Studies in Words
A Grief Observed
George MacDonald

Other Books to Tackle:


Bonhoeffer: Pastor, Martyr, Prophet, Spy by Eric Metaxas
Ragnarok: The End of the Gods by A. S. Byatt
To The Castle and Back by Vaclav Havel
The Knox Brothers by Penelope Fitzgerald
Poetry of Richard Wilbur, and Czeslaw Miloz

For 2011 I am only reading books recommended to me.  So far people have mostly been recommended long heavy dark books, so please! someone suggest something light and joyous!  Needless to say, I won't be reading all of these.  (The crossed out titles have already been read.)


In This House of Brede by Rumer Godden
Like Water for Chocolate by Laura Esquivel
War and Peace by Leo Tolstoy
The Babel Tower by A.S. Byatt
Major Pettigrew's Last Stand by Helen Simonson
The Reapers Are The Angels by Alden Bell
The Moon is a Harsh Mistress by Robert Heinlein
Poetry of Alfred Noyes
Postcard from the Volcano by Lucy Beckett
For You Departed by Alan Paton
The Children of Men by P.D. James
Flavia de Luce mysteries by Alan Bradley
Changing Places by David Lodge
The Spire by William Golding
The Potting Shed by Graham Greene
From Bauhaus to Our House by Tom Wolfe
A Severe Mercy by Sheldon Vanauken
Goodbye Without Leaving by Laurie Colwin
A Writer Returns to the Kitchen by Laurie Colwin
Man Alive! by G. K. Chesterton
The Long Goodbye by Dashel Hammit
The Eyre Affair by Jasper Fforde
Diamanche and Other Stories by Irene Nemirovsky
Journal by Katherine Mansfield
The Princess and the Goblin and The Princess and Curdie by George MacDonald
Ronia: The Robber's Daughter by Astrid Lingren
Questions of Travel by Elizabeth Bishop
With a Bold Knife and Fork by MFK Fisher
Native Son by Richard Wright
Anything by Martha Grimes or Margery Allingham or Barbara Pym

Here are all my 2011 reading posts:
Reading for 2011
Spring Update
Summer Update
Some thoughts on Mystery
Barbara Pym + The Phantom Tollbooth
Best Picture Books of 2011
Summary: Reading in 2011