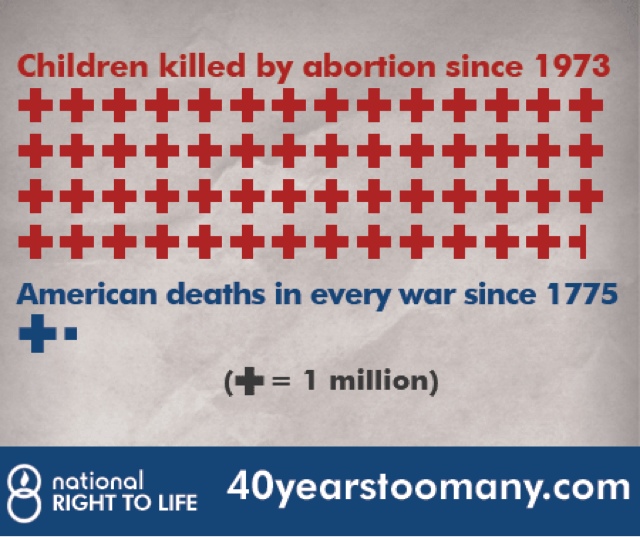 I'm just going to claim this week for Respect Life. Here are a few timely clips from around the web from yesterday's 40th Anniversary of the passing Roe v. Wade.

Elise Italiano makes the case for a New Feminism in Public Discourse, addressing several myths about Abortion. Her response to the question of rape is the most compelling I've heard:


Anyone who has ever talked to or counseled a woman who has been sexually abused knows that there is nothing more horrific, violent, or inhumane than an assault like rape. Many abortion-rights advocates argue, from a sincere sense of compassion, that a woman who already has suffered such a grave act of violence should not have to carry or give birth to a child who will remind her of this violence.

Though this argument seems compelling, there are stronger arguments against it from a feminist perspective. First, what society would ever say that a daughter should die for her father’s wrongdoings? At any other stage of a girl’s life, most feminists would reject such evil. Why is her status in utero any different?

(Part of an excellent symposium about the 40th Anniversary, put together by Ryan Anderson.)

My friend J sent around this incredible story about a couple in Britain who decided not to have an abortion after seeing the smile of her son during a 3D scan. "Mr. Newton also wrote about this and a few other life issues, late last week. Don't miss Lucian's remembrance page, which has beautiful photos.

A balanced appeal not to show graphic images of Abortions at the March this Friday from Simcha Fisher. I especially love her conclusion:


So when should you use graphic images? When a teenager shrugs and says, "My health teacher says it's not a person until 25 weeks." When someone who works at a clinic says she's doing a gentle, compassionate work of mercy. When your boyfriend wants you to get rid of "it" before it becomes a real baby. When a college girl likens unborn babies to tumors or parasites. Then you can respond to the actual situation, to the actual person. Then you can take out the picture and say, "Is this what you're talking about?"

I believe that everyone should see an image of an aborted baby once in their lifetime. And I believe that, like any traumatic image, it will stay with you. Once or twice in a lifetime is enough.

An annual must-read: Richard John Neuhaus' reflection "We Shall Not Weary. We Shall Not Rest," reprinted on the anniversary, every year by First Things.

Finally, if you have no one to march with this Friday, I do recommend meeting up with the Dominicans. Here's their schedule and information about meeting-up with them for the March. They are, as you well know, the best.
Posted by Margaret E. Perry at 12:00 PM