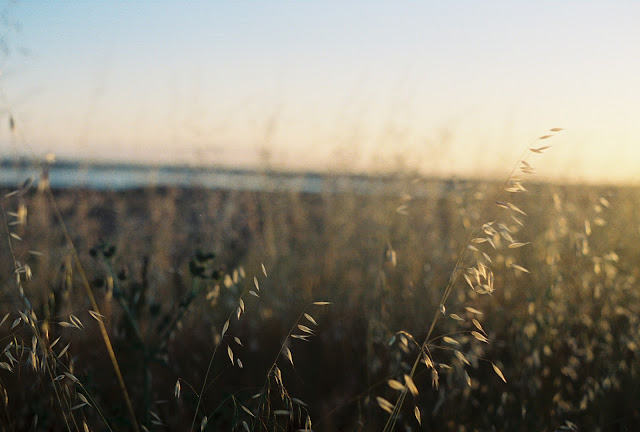 Stearns sent me this a few weeks ago. By Geri Doran, who I am going to have to look up now. (Photo: mine, film.)

Because in the heat-drenched night an angel prevailed. Into her belly, he said.
Into her life a shimmer, drawn like satin drapery over her breast. She heard this
in her dream, its echo rustling under the day’s water-bearing and washing
until sun’s rest, a voice as ardent as blue dahlias casting off their petals.
Foundling,

said the angel, this now, your belly, swollen into the bright foregift of martyrdom,
this shall mean bounty; sheaves of wheat on your dress will be the everlasting mark
of your sweet and fertile entailment. She must have heard this, couldn’t have mistaken
dahlias for a slip of wind or Joseph’s breath, in and further in, for it is true that
the faded muslin

of her day-dress was embroidered now with stalks of wheat, just as the angel had said,
and that the painters, when they came, all those centuries later, to paint her, divined
the dress, knew to render her plump, the fine lines near her mouth fleshed out, her belly
already a small rise when she slept and a shallow bowl for her hand when she bent
at the well.

Beatific, the look the painters would give her, and later, after all the trials, still
picturing her full and fertile and now dolorous—that was their word—the dolor
of Mary, mother of Jesus, when rage is what it was, those spots of red in her cheek.
Not some bright and dovetailed sadness but an always-impending bounty bought with
a heavenly chit.

So she was ample, and still young at the cross, Mary, broken mother of Jesus, mothering
a son matted with blood and straw and trying, all of them trying, to make it mean
something. That’s the part the painters leave out, how each time the sun ascended towards
God she would say, let us be done today, no one imagining a mother wishing that,
wishing even

death if it meant, finally, an end to a bounty so unfailingly meager it was no more
than an empty furrow in an empty field, not the promised harvest, nothing shimmering
or silkening the years, just the cold hard fact of corporeal love. Foundling, said the angel.
Foundling, would you do it again? A ploughed field stares up at a parched sky.
Mary the dolorous

mother of God, Mary the good field waiting. Not bounty but its unrelenting prospect,
the womanly belly with its rounded, wheat-colored swell, the stalks bending
in the windborne breath of heaven, and scattered among the sheaves the long, tapering
stems of the pure-white lilies of the valley, their small bells ringing quietly, ringing yes,
ringing always.
Posted by Margaret E. Perry at 12:00 PM

Email ThisBlogThis!Share to TwitterShare to FacebookShare to Pinterest
Tags poetry