Exercises in Serendipity: Coral and Moss 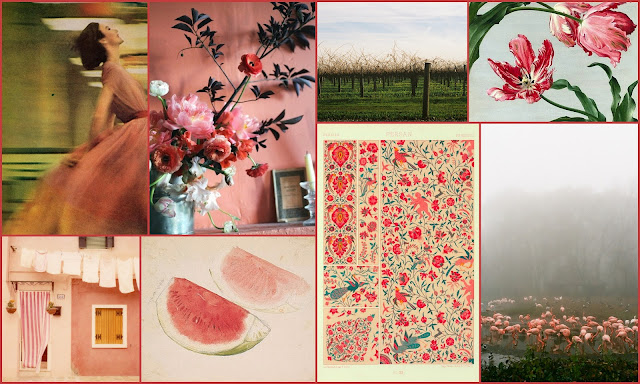 I would also like to point out (while I have your attention) that I was obsessed with flamingos when I was a kid. I've never been much of a bird person, but I would clamor and beg till Dad took me to the flamingos whenever we visited the Zoo. And I'd make him explain to me all over again about how they are white, but when they eat lots of certain foods they turn pink. I was then obsessed with eating shrimp. Which, now that I think of it, was quite an ingenious plan on my father's part.

Be sure to click to the original sources to see the items in their full glory. (I especially love the watermelon.) Clockwise from left: Woman // Peonies // Vineyards // Tulips //  Flamingos // Persian // Watermelon // Street.

Email ThisBlogThis!Share to TwitterShare to FacebookShare to Pinterest
Tags serendipity