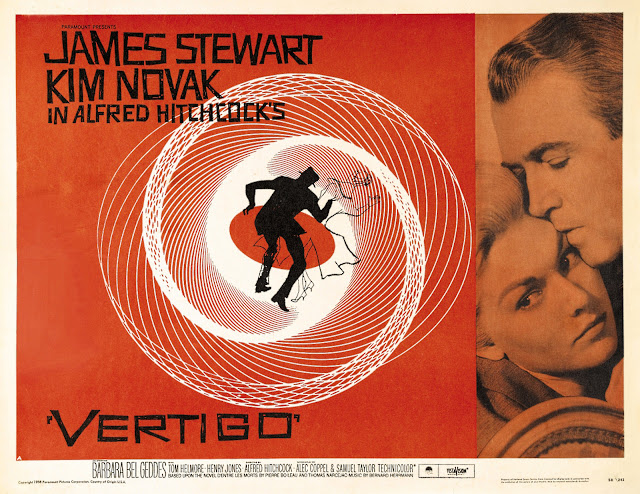 PES passed along this excellent discussion of the metaphysics behind one of the greatest mystery films ever created (AFI says its the best), Alfred Hitcock's Vertigo.  (Don't read if you have not seen the movie, it's filled with spoilers, and this is a movie you really don't want spoilt. I don't include any of the spoilers in the text below.)  Written by philosophy professor and writer Edward Feser, it asks the essential but overlooked question why do we care?


What I want to focus on here, though, is the very core of the story -- Scottie’s obsession with Madeleine. Why do we find it plausible? Why do we sympathize with him? Of course, you might not find him plausible or sympathetic. For one thing, for Scottie to pursue a romantic relationship with the woman he knows as Madeleine would (as far as he supposes) be adulterous. But that is not to the point. The film does not require us to sympathize with adultery. The guilt Scottie presumably feels over his attraction to Madeleine, and her unavailability given her purportedly married status, only adds to his torment, and it is that torment -- the intensity of his longing for what he cannot have -- that the movie needs us to feel with him.

Still, even the most sympathetic viewer wants at times to say “Steady on, Scottie! She’s just a woman!” Surely only stalkers and other oddballs are capable of this much interest? And yet Scottie is not a stalker or an oddball. He’s good old Jimmy Stewart, and Stewart makes the role work. And if you’ve ever been in love you understand how. Scottie’s passion for Madeleine reflects something deep in human nature; and if it is excessive, it is an excess born of something deep in the human condition, especially in modern times.

How so? First the nature, then the condition.

He roots his argument in, of all things, C.S Lewis' discussion of "Venus" (sexual desire) and Eros (desire for the beloved) in The Four Loves (which reminds me: I must re-read this.  It's been years!). Indeed, much of the article is a discussion of Lewis, and other theories of love:

I highly recommend, whether you are a fan of the film or not (personally, I like Rear Window much better), you read this piece in its entirety.

I partially wanted to link to it today though, because I have been thinking a lot about mysteries--and their power both to provide an escape and catharsis because of their formulaic suspense, and their profundity and thoughtfulness. Dorothy Sayers (you know how I feel about her hero) has a wonderful line about the power of mysteries that I can't seem to track down anywhere about how mysteries are great because they present great chaos, and then conclude with justice--that is reason--taming the emotions.  (I am a terrible paraphraser.) The salient point is that mysteries aren't just an escape, or perhaps they are the perfect escape: I don't stop thinking when I read them, but my thoughts are tied directly to a story that will resolve itself and

On RCA's recommendation, I have been reading the Albert Campion mysteries, by Margery Allingham.  They are marvelous mysteries, as far as the genre is concerned, but they really transcend the genre too.  R and I are always talking about how much we learn about the crafting of a story and character from them.  They don't just keep us on our toes because we don't know the solution to the crime: they are fine novels in their own right.  Most recently I read Traitor's Purse, where our hero, Campion, has amnesia at the beginning of the story and not only has to figure out the solution, but he must figure out the question too!  It completely turned my idea of mysteries on its head.  It was perfection.

Meanwhile, Jody Bottum had a nice long piece on religious mysteries.  "God and the Detectives"is a meandering tour of the sub-genre (mysteries have a million sub-genres) of religious mysteries, and casually explores the affinity of crime and mystery to metaphysical questions of faith.  If you love mysteries, his piece is certainly worth a read, though I though he wandered a little too much before getting to the point that:


If we fold the two ends of the genre back together, we discover what ought not to be a surprise: They all start with a crime. They open with shots ringing out and bodies falling to the ground. However light or dark the author's picture of the world may be, however cozy or grim the fiction seems, they all begin in a world tainted by mortal sin.

That's where they end, as well. The unity of truth, the deep rationality of the world, is a central theme of Thomistic theology: a Christian claim about the structure of reality. And detective fiction depends on that rationality. It relies on at least the expectation that the mystery can be solved—that there exists a resolution to the puzzle. But the fact of crime remains, as well. Sin endures, and mysteries require murder as one of the conditions for their existence in this world unredeemed and unsaved.

Which is ultimately, why I read mysteries, and won't make any apologies for them. Right now, knee deep in two rather depressing books for book-club, I cannot wait to dive into another Campion mystery, and let the darkness of our world be conquered by a rather dashing fellow with possible ties to the british royalty and a fiancé worth her weight in gold.

I'll have to save my love of mystery television for another post, but, because I cannot resist:

UPDATE: Emily Hale rounds up some quotations from mystery writers.