I have a bunch of food-related links, so I thought I'd post them this afternoon, especially since I already posted a recipe this week.  And I couldn't possibly post two recipes in one week, could I? (Truthfully, I have not cooked anything since that salad, so, the answer is decidedly no.)

+ The Kings County Distillery is the only Whiskey Distillery in Manhattan since the Prohibition closed them all down. And Jennifer Causey, of The Makers Project, has profiled them recently.  And the photos!  Oh boy, maybe I should go into whiskey.

+ Dean and Deluca: I like to give it a hard time, mostly because when it finally moved into the Napa Valley everyone was fawning over it as the best store that ever existed, when, truthfully, they didn't carry anything there that you couldn't get elsewhere.  Here in DC, the Dean & Deluca has items you cannot find elsewhere, but it is also overpriced and their produce is not the best. But, all the same, the original D&D in Manhattan really did revolutionize gourmet food, and we wouldn't have places like Etaly, or even, lets be honest, prosciutto and good olive oil in Giant or Safeway, if it weren't for them. I found this interview of Mr. Dean and Mr. Deluca on The Brander (a whole site about brands--fascinating) quite interesting, and made me like the store in principle much more.

+ A counter-point, sort-of: Llewellyn Hinkes-Jones writes for The Atlantic about "The Folly of Bourgeois Sustainable Food." Hinkes-Jones lives in Washington, and tries to eat sustainably and on a budget, noting:


At a certain point, when only the relatively rich can afford to not ingest bovine growth hormone on a regular basis, appreciating food and where it comes from becomes a bourgeois endeavor akin to collecting Fabergé eggs. When fair trade bananas hit five dollars a pound, consumption starts to seem conspicuous.

There's nothing scientific to his inquiry: he just goes to a bunch of places (Whole Foods, a chain grocery store, a co-op, etc.), and records his thoughts.  It's nothing new.  But I think he's right when he suggests: "If eating on that spectrum were affordable, then little stands in the way of abandoning the factory farm system."

+ I've mentioned Canal House Cooking before, and I have to tell you, I am head over heels in love with their new How To booklets (free PDF downloads).  Well designed, witty, gorgeous photography, and concerned with truly essential techniques: curing bacon, making a spit roaster, building an woodfire oven, and making no-knead bread.  Ok, so maybe only the last one is essential.  But the others are essential for Maggie's-dream-life.  (via The Improvised Life)

+ Pourbrew and Renidemus will like this post, methinks: a discussion of the coffee renaissance in the States:


Specialty coffee in America today is in many ways akin to Italy's about 100 years ago: experiencing a Golden Age, when rapidly evolving technology and a fast-growing community of enthusiasts conspire to move forward preparation methodology and the quality and appreciation of coffee. There were hits and misses then, as there are now—the hits entering the mainstream and enlarging the fan base and moving better coffee from random event to everyday ritual. 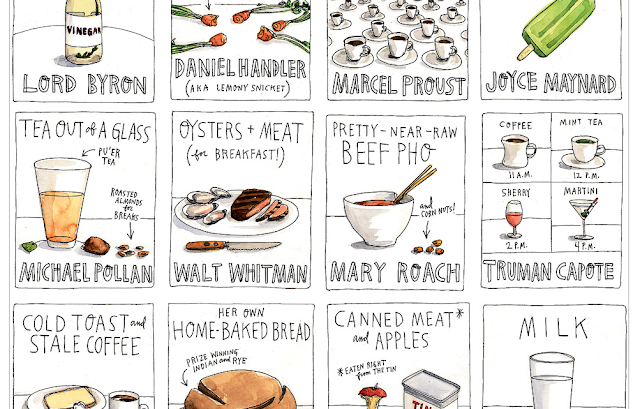 + Wendy MacNaughton created this great series of illustrations of what famous authors snack on.  (I think Truman Capote is my favorite) published yesterday in the New York Times.  (via Julie.)

+ 50 Most Delicious Foods in the World.  Or something.

+ My dad always said that he learned to love pepper when he went to college and had to eat in the cafeteria. That's when I fell in love with salt. My love of pepper on top of already prepared dishes came only recently, and I'm picky about it too.  (Or snobby.  What?)  J.J.Goode has an interesting argument against always putting pepper on your savory dishes:

The problem is that always using the two together confuses seasoning agent with spice, flavor enhancer with flavor. Salt is a non-negotiable, essential to making almost anything taste its best, while pepper has more in common with cumin and nutmeg. It is its own flavor, so why do we think it should go in everything? It makes you wonder what pepper-industry emissary snuck the notion, Inception-style, into our consciousness.

I do think spices enhance natural flavor as well as add new flavors, but he's right: pepper is everywhere, and it doesn't need to be. (Though, I will admit, I want to have a pepper grinder at my table that's filled with anise seeds, so, I can abuse flavors too.) 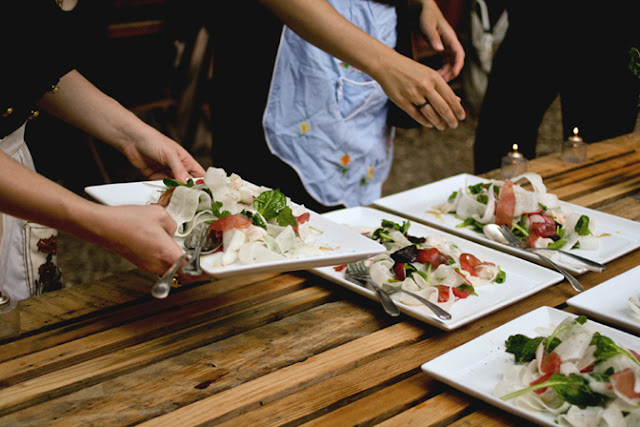 + Will someone please help me translate the Sometimes Dining (above) concept to Washington? (via Kinfolk)
Posted by Margaret E. Perry at 3:29 PM