It Should Happen to You


I have a vague recollection of watching this movie when I was a kid.  I rewatched It Should Happen to You last night, and was laughing my head off. With Judy Holliday, Jack Lemmon, and Peter Lawford (oh so smooth), in a screwball comedy, how could you go wrong?

Holliday is a recently fired young woman in New York who wants to "be somebody." Inspired by a chance encounter with her neighbor, Lemmon, she decides to rent a billboard with her name painted on it. Lemmon is clearly smitten, but she is focused on her fame. Meanwhile, Lawford, as the head of a soap company, works his charm to try to steal the billboard from her.

Sure, it's a silly premise. But it's a great film. Frankly, I don't know why there isn't a bigger Judy Holliday following in the world.  As the original gorgeous blond bimbo commedienne she transformed comedy.  Before her you were either good looking and stupid or plain and funny and smart.  She uses her looks, and her physicality to her advantage, but doesn't mind the slapstick moments either. And though her character in It Should Happen to You did some pretty silly stuff at times, Holliday's performance is memorable, because we know Gladys Glover was principled and passionate, and very very funny.  We couldn't help falling in love with her, so how could Lemmon and Lawford?  Really.


And, also, because the trailers of these things are so fun ("at her most hilarious best!"):


(I went and added Born Yesterday and The Marrying Kind to my netflix queueueueue right away. Judy Holliday! I am a fan!) 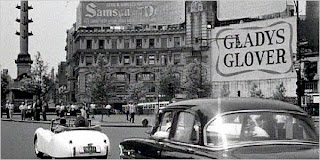