Tomorrow I am going to a place I have wanted to go to my whole entire life. Or at least, ever since my mom gave me the famous series of books by Maurgaurite Henry concerning a small spit of land just east of the Virginia shore, and the WILD horses that give character to that rough land.

Hearing the story of the gentle hard working people on Chingoteague, and about the wild horses that are so much a part of their lives set my heart on fire, when I was little (it was not just every girls "horse" stage). I've wanted to visit ever since!

Finally, I am going to Assateague Island. Sadly, I won't make it down to Chincoteague, which is a settled island, gaurded from the rough atlantic winds by the longer, wilder Assateague. Assateague is now a national wild-life preserve, and has several fine camping spots on the beach. And this weekend, with some friends from VA, I am going there!

Hopefully, I'll spot some of the wild poinies that were stranded there 300+ years ago, when a Spanish Galleon crashed off shore during a storm. Since then the ponies have run wild. Every year, in July, they are rounded up by the men of Chincoteague, and the colts are sold at auction (to help keep the population under control).

But even if I just get to enjoy the cool sea breezes, the sunshine, the campfire, the company, and sunrise over the ocean, I'll be happy. We're going to be in the northern part of the island, so it'll be quite remote. And glorious...a much needed vacation. 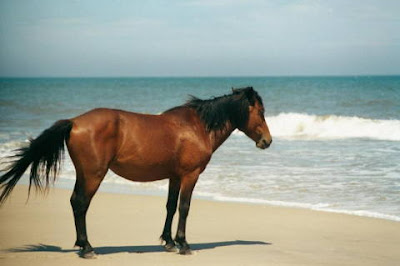